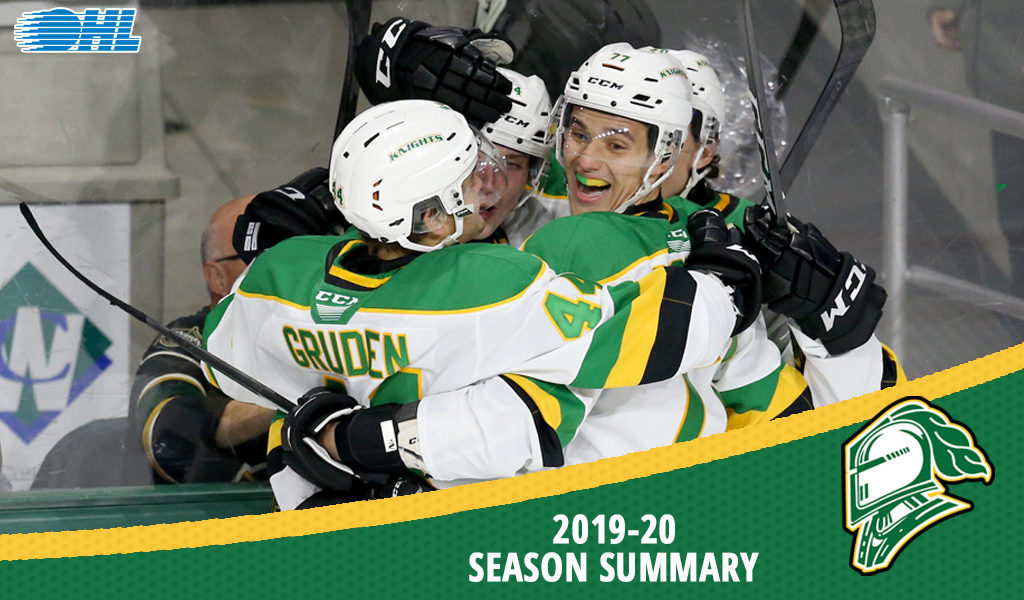 The London Knights wrapped up a 92-point season that landed them atop the Western Conference for the second consecutive year. They boasted a well-rounded squad both up front and on the back end, had an especially strong second half – riding 10 straight wins on their way to the top – and registered 40 wins in the bag; a familiar feat for the dominant club. Between rookie records, coaching accolades, a well-represented Team Canada group and a Patrick Kane jersey retirement night – the Knights had lots to celebrate this year.

Brochu emerges as top netminder
Straight out of Junior C, to say Brett Brochu’s first year in net for Knights was good is an understatement. The netminder capped off a record-breaking season as the winner of the F. W. “Dinty” Moore Trophy for the lowest rookie goals-against average at 2.40. In the 42 games he suited up for, he posted one of the league’s winningest records at 32-6-0-0 and finished with the league’s third-highest save percentage at .919. His 32 wins on the season also set a new record for the most victories by a 16 or 17-year-old first-year goaltender in OHL history. He mentioned at the conclusion of the season that he attributed much of his success to patience and confidence, but also to the deep team in front of him and a guiding hand in fellow netminder Dylan Myskiw, an overage pickup early in the season.

Team Canada’s gold medalists turn on the jets
It was Connor McMichael’s strongest season yet, and he impressed both at the OHL and international levels. The Washington Capitals first rounder finished out his third year in London with 102 points and as one of four OHL skaters to hit 100 ticks this season. He’d also finish third in goals scored, having lit the lamp on 47 occasions over 52 games, and brought home a gold medal with Team Canada at the World Juniors alongside teammate Liam Foudy, who also saw much success in a few different realms. In just 48 games, Foudy matched his previous 68-point total; half of which came over an 18-game point streak that started on Jan. 26 and concluded with the season’s abrupt end. The fourth year vet also had a chance to dip his feet in NHL territory and when the Columbus Blue Jackets called him up on an emergency basis for two games on the big stage over which he earned an assist.

Applause for the Hunters
Another big year for the very decorated Dale Hunter came with another milestone. The Knights bench boss became the third coach in OHL history to earn 800 career wins this past January. Along with brother Mark, the Knights’ general manager, he led Team Canada from behind the bench to their 18th ever gold medal finish at the World Juniors. Of course, after all that, finishing first in the West is an accomplishment in and of itself, as is yet another 40-win season.

A pair of point-producing defencemen
The Knights were strong on all fronts this season, but the high-charting efforts of Ryan Merkley and Alec Regula deserve to be highlighted. Regula, a 6-foot-four Chicago Blackhawks prospect, put forth an exceptional 27 markers; the league-highest among defenceman and most by a Knights blueliner since 2001-02. The elite playmaking abilities of San Jose Sharks pick Ryan Merkley, a new addition to the London lineup this season, were very much on display, helping round out one of the strongest defensive corps in the league. The fourth year OHLer boasted a career best 76 points, good for second among all OHL blue liners.

Evangelista makes a statement
There were lots of good stories coming out of London this year, Luke Evangelista’s being another. Following a scoreless 27-game rookie campaign, the sophomore skater had no trouble finding the scoresheet this time with a solid point-per game performance. Over 62 contests, the right winger was good for 23 goals and 61 points; a steep jump and a pretty good feat when you’re in the NHL Draft spotlight. Following his breakout year, NHL Central Scouting listed him 39th among all eligible North American players.