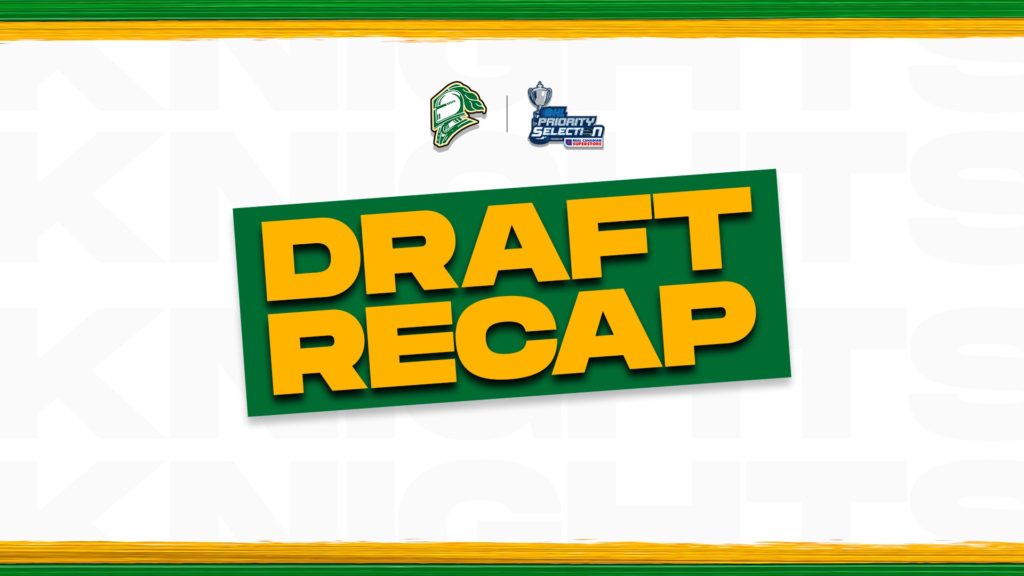 This year’s priority selection will no doubt go down as one of the most unique drafts in the history of the league for two reasons. First, most of the players selected did not play organized hockey the entire season due to the pandemic. Second, for the first time, a draft lottery was conducted to decide the order of selection.

The Knights drew the 16th overall selection, and through trades entered the draft with 16 picks, including five selections in the first three rounds.

The 2021 draft class features one goaltender, eleven forwards, and four defensemen. Four of the players are from south of the border and four of them are from the Greater Toronto Hockey League. Three are sons of former NHL players and one is a brother of a current Knight.

The comparisons to Mitch Marner will be unavoidable for Barkey as he begins his junior hockey career.

Just like Marner at 16, Barkey is an undersized forward with an abundance of skill and creativity with the puck. Both were drafted in the same range and attended Hill Academy, a private school for student-athletes in the Greater Toronto Area.

Barkey won’t mind the Marner comparisons, though – he told Ryan Pyette of the London Free Press he models his game after the former Knights captain.

A lack of size didn’t prevent Marner from having a legendary OHL career, and it hasn’t held Barkey back thus far either. In major bantam, he finished fourth in GTHL scoring – second in points per game.

Cowan makes up for his smaller frame with a relentless work ethic and by always being one step ahead of everyone else. In another strong Elgin-Middlesex Chiefs group, the Strathroy native was the chief creator of offence, always looking to capitalize on open ice and find his teammates. He has formed good habits off the puck that will make his transition to the next level easy.

The son of the famous NHLer Radek Bonk possesses his father’s size and is renowned for his poise and playmaking ability from the blueline. Oliver doesn’t create offense through dynamic puck handling or skating, rather through his vision and ability to read the play. His smarts translate in his own zone as well, making him a well-rounded player that should fit right in on a talented Knights blueline. Before the COVID-19 pandemic, he had made it to the HEO AAA Bantam Finals and was set to join the Carleton Place Canadians U18 AAA team for the 2020-2021 season.

Prior to the league being shut down, the centre finished first in league scoring and led his team to the finals against his new teammate, Bonk. He is tailor-made to play down the middle of the ice, always trying to move into high danger areas, and shows strong defensive instincts. Paris was supposed to play for the Navan Grads U18 AAA team in the HEO U18 league this past year.

Lloyd spent the 2019-2020 season with the North York Rangers of the GTHL. This past year he moved to the Kitchener Jr Rangers program and was the first Knight selected from the Jr Rangers since the 2005 OHL priority selection.

The 6’1 forward from Peterborough was over 0.5 points per game during the 2019-2020 season with the Central Ontario Wolves. Johnston was set to join the Peterborough Pete U16 AAA program this past season.

The only goaltender selected by the Knights this year, Donovan played in the U18 league as a 15-year-old last year.

His father is Shean Donovan, a development coach with the Ottawa Senators. Shean also played with Head Coach Dale Hunter in his final season in the NHL with Colorado.

Rylan is the first goaltender the Knights have picked out of Eastern Ontario since 2012.

Regarded as one of the top American-born 2005s, Minnetian is a dynamic offensive presence from the backend. He played forward last year and scored an incredible 22 goals in 23 games against players as old as 18 before transitioning to the blueline this season.

Minnetian put up 15 points this year yet was one of the Gordon Conference's most dangerous players.

Cerrato is another coveted name coming from the High Performance Hockey League. He is an electric player to watch, prone to making highlight-reel plays and end-to-end rushes. In the USA Hockey National Championships, Cerrato led Honeybaked to the 15O title, scoring once and assisting on three in a 6-3 victory over Florida Alliance.

The Knights have found plenty of talent in the Honeybaked program over the years: Patrick Kane, Max Jones, and Jonathan Gruden all played their minor midget seasons in Detroit.

Drafted from the famed Toronto Marlboros program, Castagna is a winger who plays the game at a high pace. He possesses elusive four-way speed and quick hands.

Castagna and the Marlboros were set to face off against the Toronto Jr. Canadiens in the GTHL Bantam Championship before the 2019-2020 season ended.

Blake Montgomery possesses the same big frame as his older brother, and current Knight, Bryce. He will no doubt grow further, too – Bryce is currently 6-foot-5 and 220 pounds.

The Hunter brothers are no stranger to having brothers play for them – Matt and Ryan Rupert, Corey and Danny Syvret, Gerard and Joey Keane, and of course, Dylan and Tucker Hunter have all donned the green and gold.

After his brother, Michael becomes only the second player drafted born in Israel. Their father, Pavel, played professional soccer in Latvia.

Voortman becomes the second player in two years that the Knights drafted from the Thunder Bay Kings program after they picked centre Jack Pineau last year.

Voortman is a relative of the famed Northern Ontario hockey family, the Staals.

The son of former NHLer and current Columbus Blue Jackets Director of Player Personnel, Chris Clark, Braiden is already almost as big as his dad was as a pro. Chris took over the role from Knights owner Basil McRae, who is now the Jackets’ Assistant General Manager.

The Knights’ final selection of 2021 is another small, but skilled forward. In an interview with Bill Potrecz of BP Sports Niagara, Tonelli described himself as an all-around centre who focuses on making plays for his linemates.

KNIGHTS SWAP PICKS WITH OTTERS
2 weeks ago
5:11
5 YEARS AGO TODAY
2 weeks ago