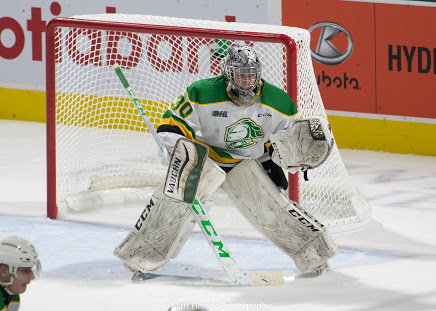 A difficult beginning to the season seemed to give the Knights all of the motivation they needed to gain their first win against Erie. Their dominant offensive performance was made that much more impressive by Brett Brochu’s outstanding performance in net.

After the Knights gained the lead halfway through the first period, Brochu made sure to maintain the advantage. A pass across the front of the Knights’ net found an Erie player with a perfect chance to even the score. Though Brochu’s left pad was in position in time, the puck was on target for the top of the net. With a quick flash of leather, Brochu’s stopped the certain goal with an outstretched hand, earning a collective amazement from the entire arena.

The remainder of the game only padded Brochu’s stat line further. Two goals on 25 shots gave the goaltender a .920 save percentage, and the play which resulted in Antonio Stranges’ second period goal began on Brochu’s stick, awarding him his first Ontario Hockey League point. With the final score line reading six for London and two for Erie, Brochu was able to celebrate his first win as an OHL goaltender.

The following night, the Tilbury, Ontario native once again played his part in putting the Knights back on track for a successful season. Facing 33 shots against the Hamilton Bulldogs, Brochu only allowed three past him. Mid-way through the third, the 17 year-old twisted his body to prepare for a weak side attack from Arthur Kaliyev. A perfect pass through the slot left Kaliyev with a wide open net, but Brochu was able to reach out his stick at the last second, pulling the puck back from the goal line. With such a dominant performance in net, his teammates were able to extend their lead, and finish the night with a seven to three win.

The Knights will look to continue their winning streak on Friday as they take on the Ottawa 67’s at Budweiser Gardens.