Confidence and patience the keys to Brochu’s winning season 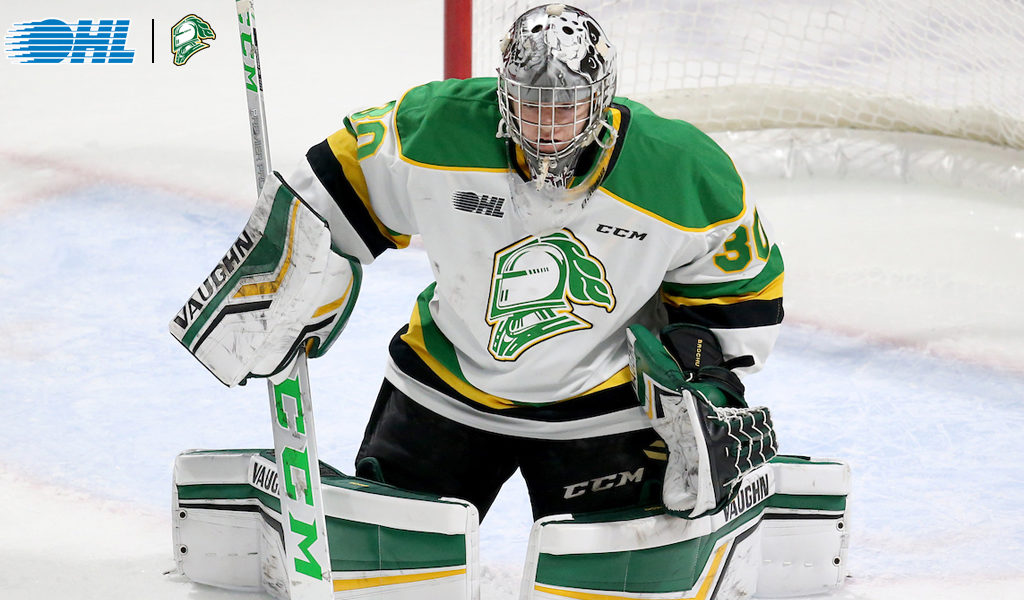 Brett Brochu headed into the season hoping to crack the London Knights roster. He emerged a record breaker.

Stepping off the ice at the junior C level, the 17-year-old netminder knew that in order to gain a sought after spot in net for the decorated Knights, he was to focus on gaining the confidence of the team in front of him.

“Gaining their confidence when they’re playing in front of you is a big thing,” he said. “It’s tough to do as a younger guy.”

A remarkable rookie season for @BrettBrochu ? @LondonKnights netminder made #OHL history with his 32nd win of the season on Sunday.

Of course, with consistent wins comes confidence, and as the season played out, it was clear Brochu had no problems in that department. His rookie campaign saw one of the league’s winningest records at 32-6-0-0, which is the most wins recorded by a first year 16 or 17-year-old netminder in OHL history.

But breaking a league record hadn’t crossed his mind back in September. Having spent last season in net for the PJHL’s Dresden Jr. Kings, Brochu knew the jump to the OHL would come with its adjustments. The shots would be harder, the game would be faster, the top lines would be stronger.

“The speed change is huge,” Brochu said. “You have to adapt to different styles of play and make sure you do it quick enough to hold on to your spot.”

Brochu was taken in the sixth round of the 2018 OHL Priority Selection out of the Chatham-Kent Cyclones Minor Midget program. Last season with the Kings, he was recognized as Stobbs Division Rookie of the Year with a 27-11-0 record, 2.46 goals-against average and .915 save percentage over 38 regular season games. He went 6-5 in the playoffs with a 2.10 goals-against average, a .931 save percentage and a pair shutouts.

Goaltender @BrettBrochu has been officially named the 2020 recipient of the F.W. ‘Dinty’ Moore Award for being the rookie goaltender with the lowest goals-against average during the regular season ?

While the 17-year-old had his eyes set on a place with the Knights following his phenomenal performance, he hardly anticipated he’d wind up the team’s starter come later in the year.

“I just took it one day at a time and I guess the second half of the season worked out really well,” he said. Of the 24 games he suited up for after Christmas, only two were losses.

“Each game I tried focusing on little things and improving on the little details of my game, trying to stay on top of everything.”

Those little details included rebound control, maintaining depth, establishing a comfort level with the team in front of him.

And patience. Lots of patience.

“You’ll never have enough patience in your game,” he said.

According to Brochu, a lot of that preparation came in the summer, where he trained with other players at the junior A level, easing his way into the start of the season.

Off the ice, the Belle River native trained with Rob Maggio, who specializes in training with hockey players. On the ice, he trains with Perry Wilson and his goalie coach in London, Daren Machesney, working on his speed and getting into a rhythm.

But finding that rhythm was no inevitable feat, especially as the beginning of the year saw some ups and downs that included some moves around the team. One of those moves was the addition of Dylan Myskiw, an overaged netminder with years in the WHL, who wound up a good guiding hand for Brochu.

“He shows me what to do and how to prepare yourself in all aspects,” he said of his goaltending counterpart.

“We’re competing for a spot all the time but we end up pretty close because we’re the only two guys on the team who know what we’re going through.”

Brochu also credits the Knights’ many leaders with helping him find his groove.

“We have some really good players that showed me what it takes to succeed. Guys like Liam Foudy and Alec Regula who take the game really seriously and are really good at it. It just shows that playing is fun and winning is fun too.”

And that winning record etched into the league record with his name attached to it is something he also vehemently credits the whole team with.

“It was definitely an awesome feeling breaking the record but I’ll give it to our team and everyone in our organization in helping me get that,” he said. “We have a really solid team.”

The Knights finished the season atop the Western Conference for the second straight season, owning a 45-15-1-1 tally. At the conclusion of the season, Brochu took home the F.W. “Dinty” Moore Trophy with the best goals-against-average among OHL rookie goaltenders at 2.40.

“You start getting wins and you start to feel comfortable with yourself and having confidence is huge for any player,” said Brochu of the past season. “Staying consistent is big for a goalie especially. You need to give the team a chance to win every night.”

Today, Brochu tries to model his game closely to that of Nashville Predators goalie Juuse Saros, who stands at 5-foot-11 just like him. “He has to play exceptionally well with a lack of size, playing really positional and making up for it with other aspects of his game.”

But ultimately, when it comes to role models, he thinks of his older brother Zak, who also used to be a goalie. He remembers watching his brother play growing up, and standing in net during road hockey games with his cousins.

The tables have turned, and now Zak is the one showing up to the rink to watch his brother play.

Not just play, but thrive.

“He was the reason for everything,” Brochu said of his brother. “I’m glad I had that experience with him.”