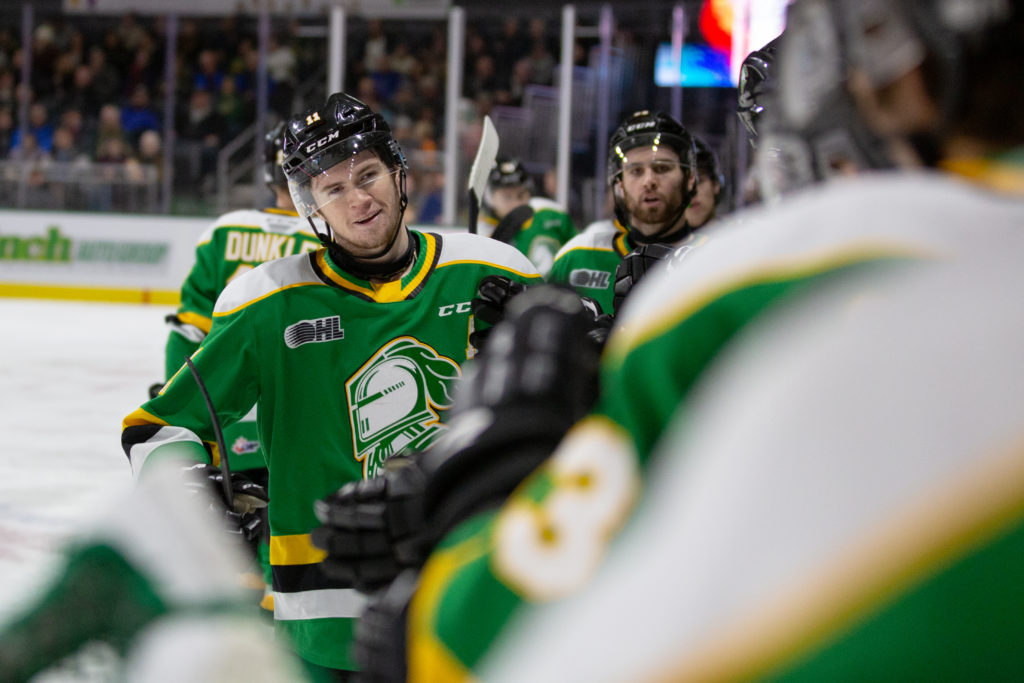 The past weekend saw the team experience memorable moments for both past and present players. On Friday night, a sold-out Budweiser Gardens watched Patrick Kane’s “88” be hung in the rafters, and place where it will stay for the rest of the team’s history. Fans were reminded of his incredible statistics over his historic season with the Knights and listened to the man himself explain just how special playing in London is to every teenager who comes through the organization. “Playing in front of 9,000 people every night, it’s like a mini NHL here.” When a junior career is played in an atmosphere such as London’s, the next step is made that much easier.

The game that followed the ceremony showcased players who will soon be making the leap to the NHL themselves. 12 players that took the ice that night have already been selected by NHL teams, with many more on the scouting radar.

London’s four goals would all be scored by drafted players. Ottawa Senators draftee Jonathan Gruden found the net first after finding his own rebound during the first period. Minnesota Wild pick Matvey Guskov would score twice in the second period. First on a breakaway pass by Moskal which would find an opening in the far corner of the net, and again on a shot which saw the Russian catch a pass from Alec Regula, spin in place, and beat Sudbury’s Christian Purboo a second time. Ryan Merkley scored between Guskov’s two, with an end-to-end effort that beat Purboo by finding the top left corner.

Sunday’s game against the Erie Otters created two more memorable moments in the budding careers of two Knights players. The first period would see the Knights take advantage of miscommunication on the Erie bench, as they were assessed a minor penalty for too many men on the ice. Erie’s penalty-killing so far this season has been stellar, ranking first in the OHL. This would still not be enough to stop Connor McMichael from finding an opening above Erie’s Daniel Murphy. The second period would see a single goal that began from a sprawling defensive play by Ryan Merkley. The ensuing play saw McMichael net his second of the contest.

In the third, Billy Moskal would give the Knight’s two more chances against the Otters’ penalty kill. Moskal would draw two penalties out of members of Erie’s leadership group, with Jack Duff and Jamie Drysdale each earning two minutes. Alec Regula would score during the second power play on a pass from Jonathan Gruden. On a beautifully designed play mid-way through the third, Liam Foudy found Billy Moskal, who released a quick one-touch pass to Connor McMichael who found himself staring at an empty net, which he would take full advantage of. With that, McMichael earned his fifth hat trick this year and returned to a stat line that reads more goals scored than games played this season. The game would see two more goals, with Luke Evangelista scoring on an empty net, and Sudbury native Max McCue putting one past Murphy, earning his first goal in the Ontario Hockey League.

With these two wins, the Knights remain perfect at home in 2020 and have won eight of their last nine. The team will travel to Windsor on the 23rd to face the Spitfires, before returning home for another two home game weekend.