Friday June 22nd and 23rd saw the NHL Entry Draft make the dreams come true for 217 young men from around the world. Amongst those picks, four London Knights were taken this weekend, including two Friday night during the first round.

Evan Bouchard, captain of the London Knights, was drafted first amongst those representing the green and gold, taken 10th overall by the Edmonton Oilers. Bouchard finished the season with 87 points, leading the OHL in scoring as a defenseman, and leading the Knights to the playoffs.

Liam Foudy didn’t have to wait very long after Bouchard to hear his name called.  The Columbus Blue Jackets selected Foudy 18th overall. The flashy forward finished the 2017-2018 season with 24 goals, including a 7-game scoring streak late in the season. Foudy joins Knights alumni Josh Anderson and Scott Harrington in the Columbus system.

Alec Regula was the third Knight to get selected in the NHL Entry Draft. Regula was selected by the Detroit Red Wings in the third round, 67th overall. Regula boasts the honour of being a part of the OHL All-Rookie First Team and finished the 2017-2018 season with 25 points. Regula, a Michigan native, joins former Knight Andreas Athanasiou in the motor city.

Jordan Kooy was the fourth Knight to get selected in the 2018 NHL Entry Draft.  The Vegas Golden Knights picked Kooy in the 7th round. Kooy was voted to the OHL All-Rookie Second Team and finished the 2017-2018 season with .904 save percentage. 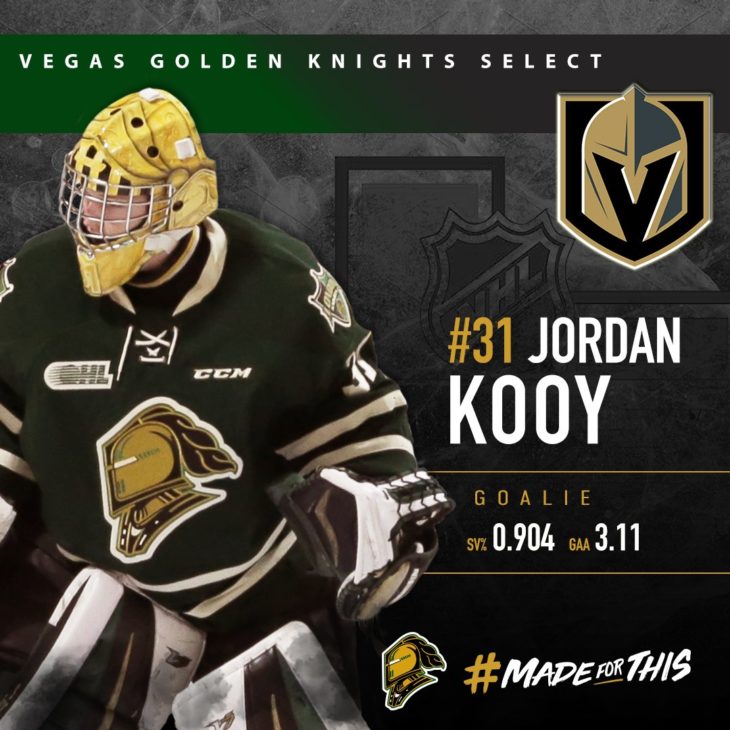