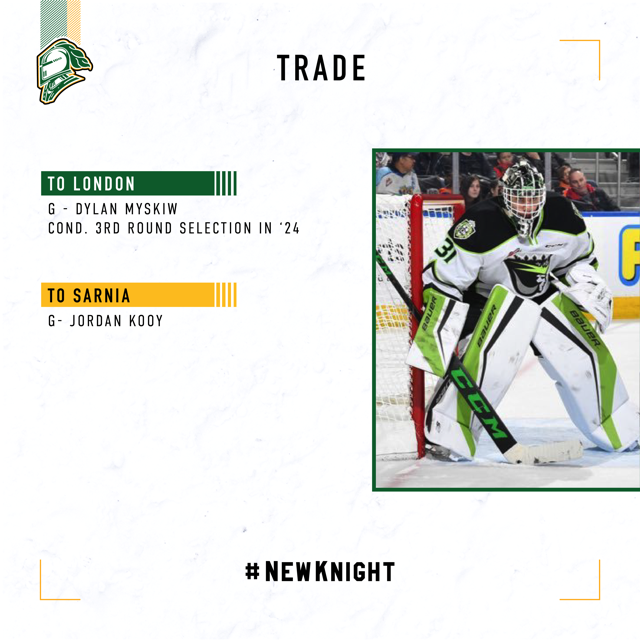 The London Knights would like to announce that they have acquired goaltender Dylan Myskiw, and a conditional 3rd round Priority Selection in 2024, from the Sarnia Sting in exchange for goaltender Jordan Kooy.

“We are pleased to welcome Dylan to the London Knights organization,” said Mark Hunter, General Manager for the London Knights. “Dylan is veteran player that brings a lot of experience as a starting goalie to the team. He started 45 regular season games for the Oil Kings last season and led his club to the conference finals before being defeated by the eventual WHL champions.”

Myskiw is originally from Winnipeg, Manitoba, and spent the past three seasons in the Western Hockey League (WHL). He was claimed off waivers by the Sarnia Sting after clearing WHL waivers. Myskiw was originally drafted in the 6th round, 112th overall, by the Victoria Royals in the 2014 WHL Bantam Draft.

“The London Knights would like to thank Jordan for his time here in London,” said Knights’ General Manager Mark Hunter. “He was a great member of the organization since he joined the Knights as a 16-year old. We wish him all the best moving forward.”

Dylan Myskiw is in his final season in the Canadian Hockey League, playing this season as an overage player.