LONDON KNIGHTS AT THE 2020 WORLD JUNIORS 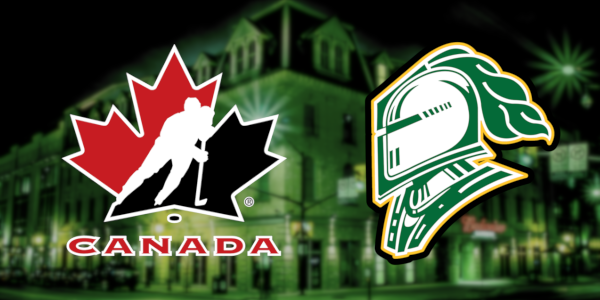 Two players will be representing the London Knights at this year’s edition of the World Junior Hockey Championship.

After it was announced that Knights Head Coach and Owner Dale Hunter would be behind the bench and his brother, Mark, would manage the team, the only question remaining was which players would join them in the Czech Republic? This week, that question was answered.

After being a late cut from the team last year, Foudy was determined to make the team after another year of development in London. The Scarborough, ON native found success in the pre-tournament alongside Flint’s Ty Dellandrea and Owen Sound’s Aidan Dudas. TSN’s Ray Ferraro described the line as “aggressive” and “in your face.” The trio combined for goals in both games, with Foudy scoring against Switzerland and Dellandrea nabbing one against Finland.

Heading into the season, McMichael was not guaranteed a spot on the roster, but forced his way onto the team after an incredible opening 27 games that saw him score 25 goals and 59 points. Despite his goal scoring efforts in London, he is expected to begin the tournament as a role player. TSN’s Craig Button referred to the 18-year old as a forward who can “play in [any spot on the roster] and play in every single one of them adeptly.”

The Knights have always been a well represented club in this tournament, and this year is perhaps the one where they will have the biggest influence. The Knights have two players on the team, the Head Coach (Dale Hunter) and General Manager (Mark Hunter), and London Knights Equipment Manger Chris Maton and Head of Security Bob Martin are also in the Czech Republic with Team Canada. The pressure, as per usual, will be heavy on Team Canada, but Dale Hunter is welcoming it.

Speaking to TSN’s Gord Miller, he said “you want pressure…you want to be on the ice in overtime in the gold medal game.”

Team Canada got off to an impressive start on Boxing Day, scoring four answered goals en route to a 6-4 victory over the powerhouse United States. It was McMichael who opened the scoring for the Canadians, putting an Akil Thomas feed through the legs of United States goaltender Spencer Knight.

The next challenge for Canada will be Saturday the 28th at 1 p.m against Russia, who dropped their opening game versus the Czech Republic by a score of 4-3.