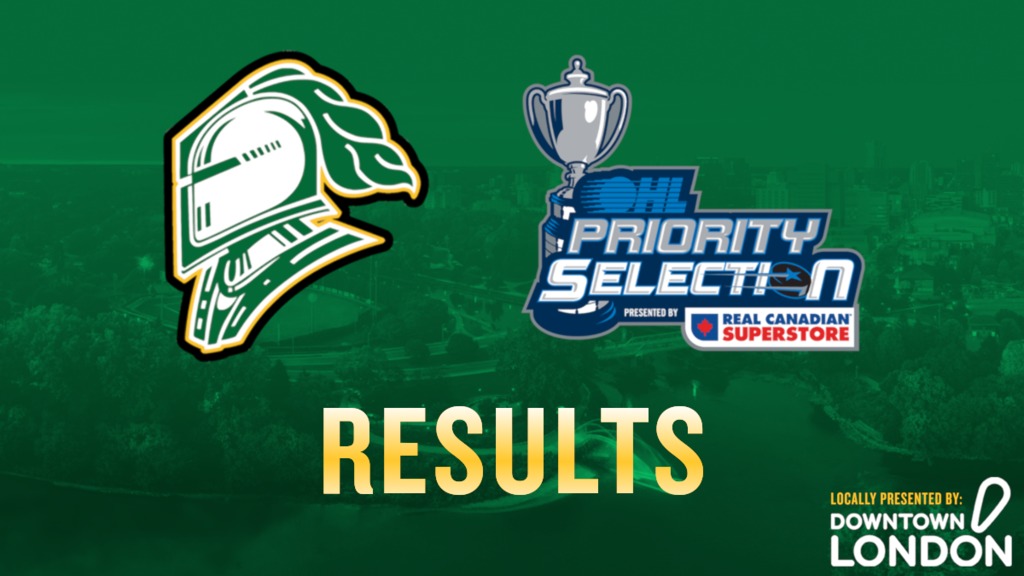 On Saturday, April 4th, the OHL and its member teams participated in the 2020 OHL Priority Selection presented by Real Canadian Superstore and locally presented by Downtown London.

With the world of sports at a halt and the 2019-20 OHL season officially cancelled, the event offered some much-needed entertainment for hockey fans, as well as a look at where some of the sport’s budding stars will be spending their junior years.

The Knights had 16 picks in the draft, including the 19th, 22nd and 25th overall selections. The class was comprised of 10 forwards, four defencemen and two goaltenders.

For the second year in a row, the Knights looked to the Kanata Lasers program for their first-round selection. Last year they picked winger Stuart Rolofs, who played 31 OHL games before the season ended prematurely. This year they picked Bujold, a smart, pass-first centre who possesses elusive speed. The Richmond, Ontario native participated in the Hockey Eastern Ontario’s Midget AAA All-Star game and finished second in league scoring.

An imposing frame and a powerful stride make Edward a presence on the blueline. His size does not restrict him – he is a very mobile defender who is not afraid to join the attack. In the offensive zone, he is a threat, with an eye for a pass and a powerful shot. The Newmarket native graduated from the York Simcoe Express program which produced former Knights captain, Robert Thomas.

Son of Ottawa Senators head coach D.J. Smith, the winger is another prospect with impressive size. Smith was tough to play against at the midget level. He leverages his body to get into positions to set up and finish plays. When his dad took the job in Ottawa, Colton joined the Lasers. Playing alongside Bujold, he also earned an All-Star game appearance. Of note – D.J. coached and captained London’s rivals down highway 401, the Windsor Spitfires.

Knights GM Mark Hunter will look to send another Sim to the NHL – he coached Landon’s father Jon with Sarnia in the nineties. Although he was born in Nova Scotia, the speedy centreman was eligible due to his dad’s OHL alumni status. He tore up the minor hockey scene out East, leading his team in scoring despite being the smallest player in the league.

A magician with the puck on his stick, Crane is able to create offence using his soft hands and excellent skating ability. In January, he committed to Penn. State from the NCAA’s Big Ten for the 2022-23 season. He was described by his coach in Buffalo as “one of the most sought-after players in North America.” The Union, ON native joined the Jr. Sabres after playing for the Elgin-Middlesex Chiefs. Brody’s father, Derrick, played for the Knights from 1990 to 1993.

George is a two-way pivot with smooth skating ability. The Oakville native reads the game exceptionally well and has the skill set to put up more numbers offensively. The 16-year-old hails from the prestigious Toronto Marlboros program that produced Connor McDavid, John Tavares, as well as Quinn and Jack Hughes.

The Michigan native was one of the most talented players available in this year’s draft. He put up an incredible 49 goals and 78 assists in 55 games with the Detroit Honeybaked 15’s. This convinced the US National Development Program to selected Nazar to its U17 Team for next season. Nazar has deadly speed and the ability to beat anyone one-on-one.

One of the top players coming out of Northern Ontario, Chitaroni is an explosive skater with a lot of raw skill. The Jr. Greyhound rose up draft boards after an impressive second half of the season. According to his coach, he played with more confidence as the season progressed.

Playing in the U15 High-Performance Hockey League, Flores faced off against Nazar and 3rd overall pick Max Namestnikov. Despite his team finishing with a 3-11 record, the Illinois-born netminder finished with a league-best .894 save percentage.

The centreman was a member of the Oakland Jr. Grizzlies team that won the Wendy Dufton Memorial Tournament that took place in London in October. On a team that boasted top forward prospects Rutger McGroarty and Hunter Brzustewicz, the Janesville, MI local was able to finish second in team scoring in the U15 HPHL.

Born in Waterloo, the centerman captained a talented Wolves team. The 15-year-old is a tireless worker and efficient in the faceoff circle. He finished eleventh in league scoring.

Another selection whose father played in the NHL, Dubinsky played on a Florida Alliance team that lost just one game all season long. He lined up alongside Seamus Casey, who was recently announced to the U17 USNDP team.

Brother of Sudbury Wolves prospect Alex Pineau, Jack is a multi-sport athlete. He is also a pitcher and represented Team Ontario at this summer’s 2019 15U Boys Ray Carter Championships.

Possessing considerable size for a 16-year-old, the winger plays a physical game. Dowling’s work ethic impressed scouts. He finished third in scoring on his team.

The second goaltender named Owen selected by the Knights this year, Wilmore played for Jason Williams, the London-born ex-NHLer and Danny Syvret, who captained the Knights to a 2005 Memorial Cup championship. He split the net with 177th overall pick Marcus Vendenberg as the Chiefs won the U16 Alliance championship.

Although Yearwood’s North York Rangers struggled to find success this past season, he led the team in scoring. The Thornhill local is a big-bodied centreman who can score goals.

The full results from the 2020 OHL Priority Selection can be found at ontariohockeyleague.com/draft