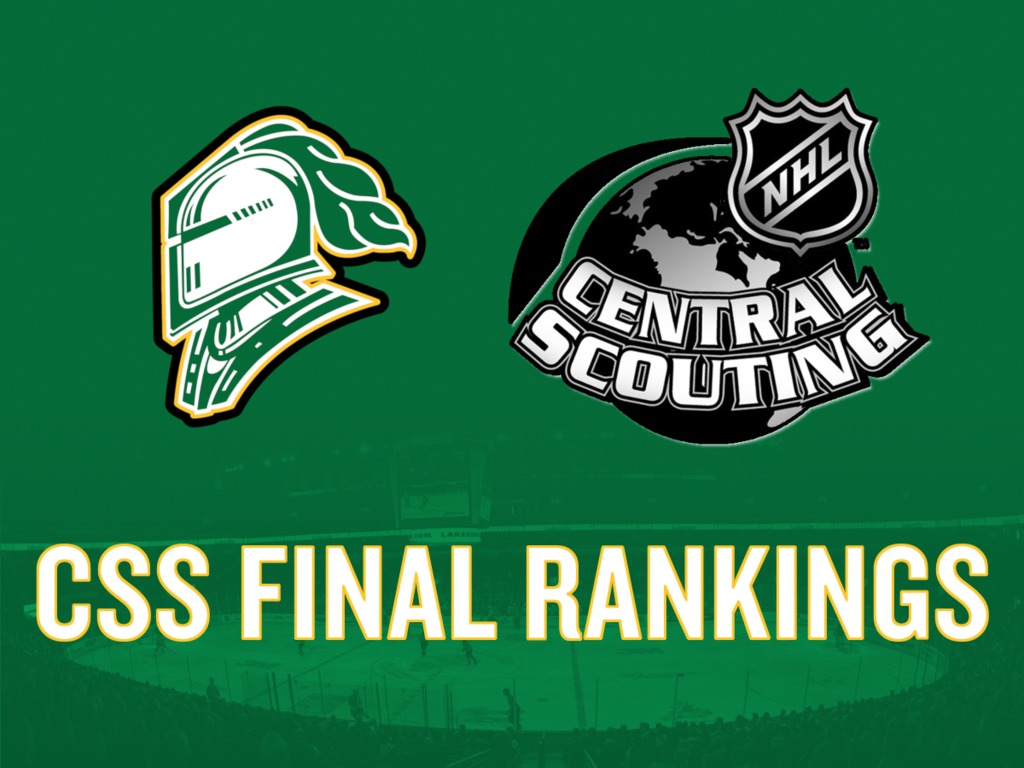 On Wednesday, April 8, the NHL Central Scouting Services issued their final rankings of all the prospects eligible for the 2020 NHL Entry Draft.

At the beginning of every season, the bureau releases a preliminary list of draft-eligible players to watch. Halfway through the year, they release their midterm rankings, and then conclude their research with a final ranking prior to the draft. The lists are divided into four categories: North American Skaters, North American Goaltenders, International Skaters, and International Goaltenders.

Four London Knights made the final edition of the rankings.

It seems every year in London, a player greatly exceeds scouts expectations and rises up the draft rankings. In 2018, it was Liam Foudy. The following year, Connor McMichael played his way into the first-round discussion. This time around, McMichael’s roommate, Evangelista, has seen his draft stock increase significantly throughout the year. At the start of the year, he was considered a C-list prospect, projected to be selected beyond the fourth round. Following a breakout start to the season in which he was scoring at a point-per-game pace, he shot up to 58th place in the midterm rankings. He finishes as the 39th ranked prospect in North America. Renowned for his playmaking ability, the sophomore forward spent the year supplying 47-goal-scorer McMichael. His impressive body of work saw him edge into Sportsnet’s April Draft Rankings in the 31st spot. 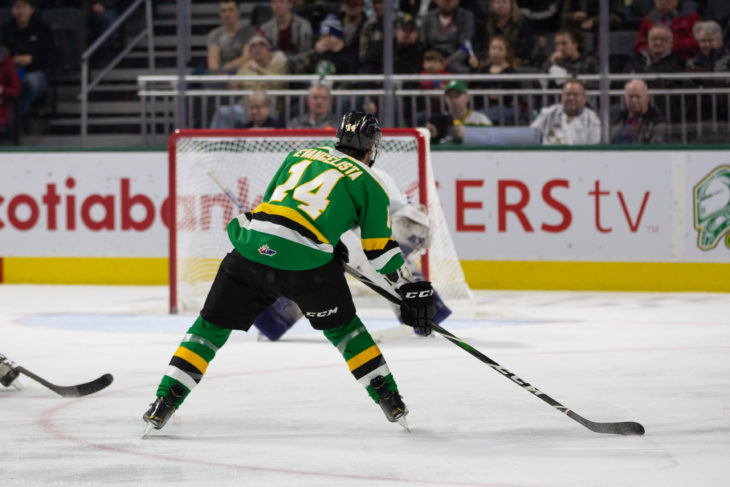 With Foudy returning, the increase in productivity from McMichael and Evangelista, and the arrival of Jonathan Gruden, Stranges had lots of competition within the Knights group of forwards. Despite this, he was able to improve on an exceptional rookie year, putting up six more points in five fewer games. The creativity and hands possessed by the Michigan-born winger are some of the best in this year’s draft. He is an agile skater with great edgework, often utilizing the “10-2” skating technique to get himself into dangerous areas. 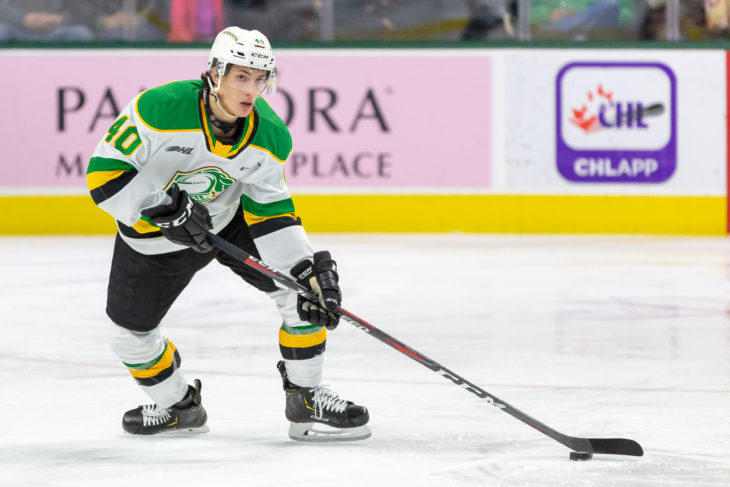 The big blueliner has drawn comparisons to former Knight Nikita Zadorov from GM Mark Hunter. In a game against the Spirit in February, we saw Steklov go end-to-end and score, just like his compatriot used to when he played in London. With a long stride and a powerful shot, he has the ability to put up more numbers offensively – he had two goals and seven assists in 50 games in his first year in North America. 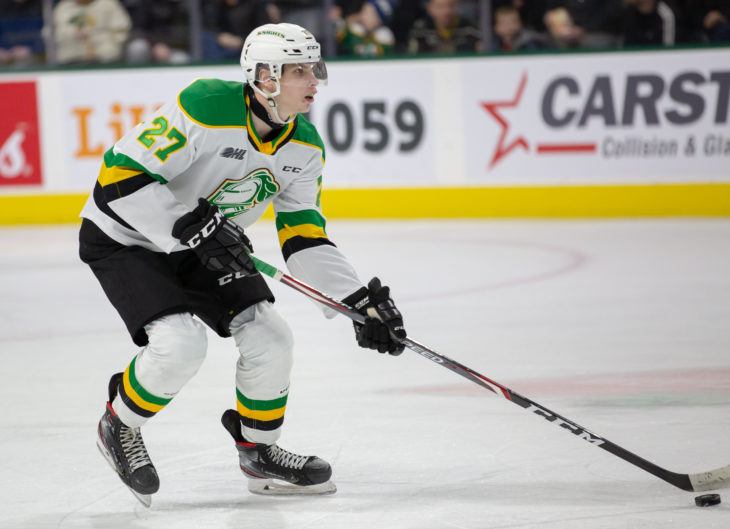 After spending last year in the Junior C Provincial Junior Hockey League, Brochu worked his way into the backup spot in training camp. The 17-year-old impressed early in the season boasted by the acquisition of over-ager Dylan Myskiw in October, who provided Brett with a strong veteran counterpart. At the time of being awarded his second consecutive OHL Goaltender of the Month award, the Tilbury, ON native had won 19 of his last 20 starts. He finished the year with the lowest GAA in the league, being awarded the FW “Dinty” Moore Award. He set a record amongst U18 goaltenders with his 32nd win of the year, usurping Vezina Trophy Winner John Vanbiesbrouck. Considering he is one of the youngest goalies available in the draft, the maturity, poise, and patience he showed in net this year is all the more impressive. 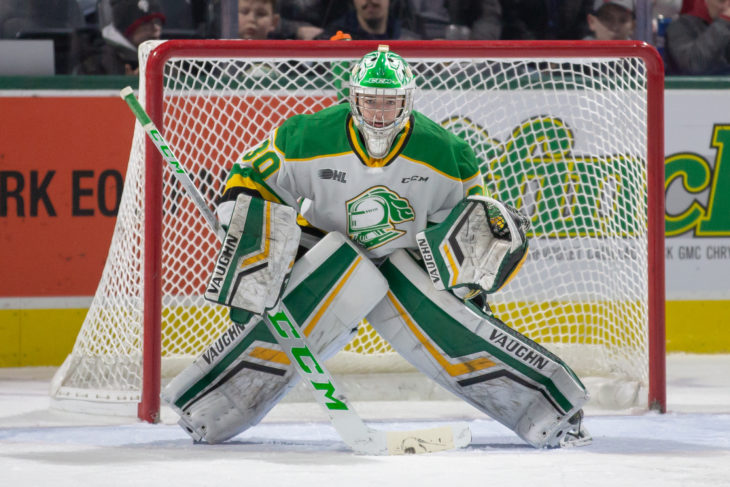 Dates for the NHL Scouting Combine and the 2020 NHL Draft are still to be determined due to the COVID-19 outbreak, as announced previously by the NHL.