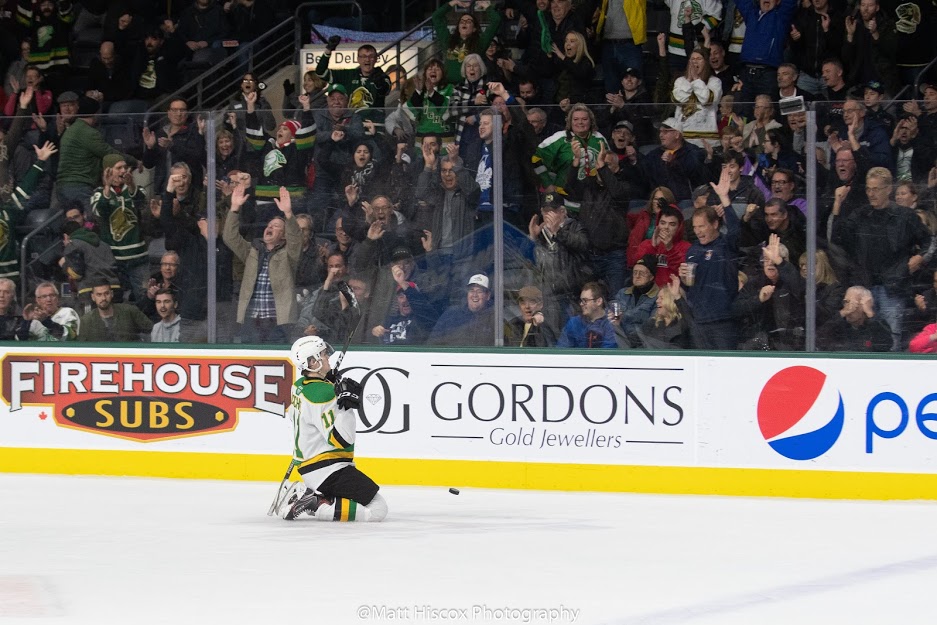 This past weekend, the Knights played as if they had something to prove. Their Friday night game found London pitted against Erie, the only team who defeated the Knights during their ‘three games in three days’ last week. Straight out of the gate, the Knights looked to take control, and three goals and perfect goaltending in the opening period proved their adjustments were right.

Nathan Dunkley opened the scoring by capitalizing on a rebound from his previous shot. Jonathan Gruden then added one of his own from a feed by McMichael behind the Erie net. The final goal of the period was the result of a five-on-three power play, with Ryan Merkley sliding the puck across the length of the ice to a waiting Alec Regula. The new co-captain made no mistake as his shot found the back of the net. This dominant scoring performance was compounded by physical play by the Knights, with both Merkley and Gruden earning collective cheers from the 9000 fans at Budweiser Gardens after booming open-ice hits.

The second period was less of a dominating performance, but made for a much more exciting game. The Otters scored four in the second, which caused the Knights to bend, but not break. After back-to-back goals early in the period, London found their bearings and began following their game plan once again. Capitalizing on an odd-man rush, Hunter Skinner fired the puck out to McMichael, who found a wide-open Gruden in front of the Erie net. The Ottawa Senators draft pick made no mistake and gave the Knights some breathing room. Though the Otters would put two more past Brochu before the end of the period, stellar penalty killing by the Knights and an incredible goal by Connor McMichael later in the period gave the Knights a one goal lead heading into the second intermission.

The third saw Erie score two unanswered goals, and a change in goaltending for the Knights. Former WHL goaltender Dylan Myskiw came into the game in relief of Brett Brochu. The former Edmonton Oil King would make his OHL debut under large pressure; down one goal in the third period to division rivals. His new teammates made sure it wouldn’t be something he would have to face alone, however. Liam Foudy had the opportunity to tie the game, but an incredible glove save by Erie’s goaltender maintained the difference. The final chance would be found in a penalty by Erie’s Matthew MacDougal. With the goalie pulled, the Knights controlled the puck with a six on four power play. A pass across the blue line from Merkley gave Skinner a lane to fire his booming shot. Erie’s goaltender was able to stop it but wasn’t able to hold on. The rebound found a waiting Connor McMichael, and he took care of the rest. The final horn sounded, and the scoreboard read six for both sides. The winner would have to be decided in extra time.

With only six skaters on the ice, the intensity of play picked up immensely. A broken London play left three Erie players charging down the ice unchallenged. The new Knights goaltender would be tested in spectacular fashion. Myskiw held his ground, stopping the first shot, and diving on a rebound a few feet out of his crease. The performance was enough to give his teammates the opportunity to end the game. A pass from Ryan Merkley found Connor McMichael at the point, and he netted his third and final goal of the night.

Though not quite as dramatic of a game as Friday’s, the Sunday night game in Oshawa showed that the Knights are prepared to climb the standings. The scoring began with the Knights capitalizing on a bad change by the Generals. Ben Roger found Matvey Guskov, who crossed into the attacking zone, and beat the goalie’s outstretched glove. This was Roger’s first OHL point and on his birthday nonetheless. Oshawa was able to tie the game on a scramble in front of the net, but the score would not stay even for long, as two minutes later, Luke Evangelista tipped McMichael’s wrist shot for what would eventually be the deciding goal.

McMichael would have the chance to net one of his own during a powerplay in the second. Even with no teammates screening the goaltender, McMichael’s wrist shot from the top of the point had no issue finding the back of the net. The power play machine would strike again later in the period. Merkley found Gruden behind the Oshawa net, who made a beautiful no-look pass to a waiting Regula. The final goal of the night would belong to Liam Foudy, whose breakaway goal gave the Knights a four-goal lead, which would not change for the rest of the game.

Eleven separate players collected points against the first place Generals, and Myskiw earned a .965 save percentage. In total, Knights players tallied 32 points in the two games this weekend, and moved up two spots in the Midwest standings. With the next game scheduled against North Bay at Budweiser Gardens, the Knights will look to continue their dominant performance.