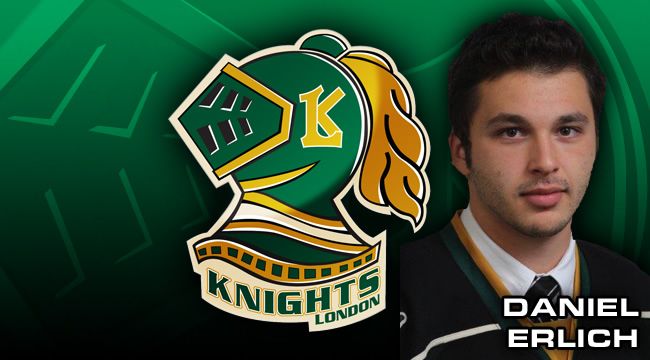 He scores two of the three goals for the Knights in the third period.

It looked, at one point, like the London Knights would never score.

They took 34 shots — many of them glorious chances — at Guelph goalie Brandon Foote and he stomped out every one.

He was, truly, Big Foote.

The Knights were at a crossroads. When you’re always hearing how you can’t score, you start to believe it.

“After the second, we needed someone to step up and be a leader and that’s what (Daniel Erlich) did. He led the way,” London forward Tyler Brown said.

Erlich, the littlest Knight, scored twice in a three-goal London third, wearing down Foote and the Storm 3-1 before 8,981 Friday night at the John Labatt Centre.

Erlich’s first was a top-shelf beauty to get London rolling. It was probably the best shot of his OHL career.

“Vladdie (Namestnikov) won the draw perfect and it ended up a well-placed shot,” Erlich said. “I don’t know if it was my stick or what but it was (a good shot). I’ve never been too lucky with the goals in my career.

“We were clutching our sticks pretty hard there. We just wanted to keep shooting. Just shut my eyes and, I don’t know, let it go.”

Erlich has eight points in his last three games. This is the kind of production the Knights expected out of him this season.

And this week, they got that glimpse.

This was the textbook London win. The Knights realize they won’t score a ton, but they know they need to score just enough to accent their industrious defensive ethic.

And of course, no one illustrates it better than the forwards who play the most — the shutdown line of Brown, Stephen Sanza and Chris DeSousa.

This was Sanza’s best game as a Knight. He was fast, physical, an expert penalty killer and scored the winner on the short side. He and his mates held Guelph’s go-to line — top NHL picks Peter Holland, Taylor Beck and Mike — to a single early goal.

“We did a good job against that line,” Sanza said. “They’re a very good line, they’re right up there. In the third, we’re down one, we know we need a goal. We just kept shooting. We had lots of chances and they just started to go in.

“Brownie gave me a good pass and I just decided, hey, why not let the shot go, see what happens. We stuck with it.”

That’s Brown’s calling card. With the Knights hanging on late, he hustled back in front of the net, dove and tipped Beck’s shot heading for a yawning cage away with his stick.

“I got a piece of it,” Brown said. “Just trying to work hard there.”

No one appreciates that kind of play like goalie Michael Houser, great again down the stretch following his bad giveaway in Kitchener.

“Brownie did what he always does,” he said. “He plays good defence out there.”

The Storm don’t play for another week.

Coach Jason Brooks said they’re going to watch the videotape over and over and learn about effort.

“Once London got the two quick goals in the third, then we decided to play desperately,” he said. “But why wait? It proves you have to work for 60 minutes out there. London works hard. They’re very good that way.

“And it’s a lesson for our guys. If we worked like that, we would’ve had more success. This league is wide open on our side.”

Hard work isn’t always artwork. This year, there won’t be a lot of Brown or Sanza highlights on the big screen.

But if they do the little things and guys like Erlich and Namestnikov keep scoring some big goals, the Knights are going to be all right.

And if they ever get the power play straightened around, all these foot soldiers might end up a force again in the OHL.

Next: The Knights face the first-place Saginaw Spirit on Saturday at 7 p.m. at the John Labatt Centre.