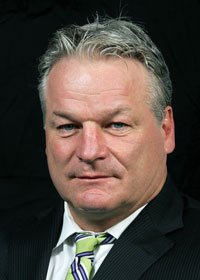 Dale Hunter, along with his brother Mark, and Basil McRae purchased the London Knights in May 2000 from the Tarry Family.  Prior to this, Hunter served as Director of Player Development for the Washington Capitals from 1999-2000.  As a player, Dale spent 19 seasons in the National Hockey League with the Quebec Nordiques, Washington Capitals, and Colorado Avalanche.  His #32 was retired by the Washington Capitals following his retirement.  He is a graduate of the Ontario Hockey League having played for both the Kitchener Rangers and Sudbury Wolves, where his number is also retired.

In 2011, Hunter left the Knights to become Head Coach of the Washington Capitals of the National Hockey League, but announced at the end of the season that he would be returning to London for the 2012-2013 season.  He then guided the Knights to their third OHL Championship, and second in a row.

In July 2013, Hockey Canada announced that Dale would coach the U18 Men’s team at the Ivan Hlinka Tournament in Czech Republic and Slovakia in August.  Dale lead the team to their sixth consecutive Gold medal after a 4-0 win over Team USA.

Hunter has worked with NHLer’s such as Rick Nash, Corey Perry, Brandon Prust, Dave Bolland, Sam Gagner, Patrick Kane, Olli Maatta and Bo Horvat. During his time with London, he has also coached three 1st Overall NHL Draft Picks during their draft year (Rick Nash in 2002, Patrick Kane in 2007 and John Tavares in 2009). In the offseason Hunter enjoys horse-racing, farming and golf.