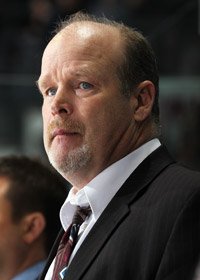 Mark Hunter bought the London Knights with his brother Dale and Basil McRae in May of 2000. During his tenure running the Business and Hockey Operations of the London Knights, he has had three of his players drafted 1st Overall in NHL Entry Draft in Rick Nash (2002), Patrick Kane (2007) and John Tavares (2009).  Mark was also responsible for building the 2004-2005 Memorial Cup Championship team, who broke a CHL Record of 30 years with 31 games unbeaten to open the start of that incredible season. The 2004-2005 team set 13 CHL Records and finished with an unprecedented record of 79-9-2-0, which was culminated with a 4-0 triumph over Sidney Crosby and the Rimouski Oceanic in the Memorial Cup Final.

Prior to purchasing the London Knights, Hunter played twelve seasons in the National Hockey League and was the 1st Round Selection of the Montreal Canadiens at the 1981 NHL Entry Draft.  He was a member of the 1989 Stanley Cup Champion Calgary Flames and is no stranger to being part of the OHL as he was the 1st Overall Selection at the 1979 OHL Priority Selection by the Brantford Alexanders.

In November 2011, Hunter assumed the role of Head Coach of the London Knights leading the team to an OHL Championship and Memorial Cup final with a 29-13-0 record in the regular season. During his 14 seasons as General Manager, the Knights have turned into the one of the most successful organizations in the history of the Ontario Hockey League, both on and off the ice.  Under Hunter’s direction the team’s season ticket holder base has grown to a present number of 7,000 up from 1,261 when the team was first purchased in 2000.

The London Knights have donated approximately one million dollars to local charities and continue to give back in many ways.  The London Knights Hockey Club was also the Platinum Sponsor of the 2010 Special Olympics when Mark and Dale Hunter pledged $100,000 to fund the games.