A five-goal second period made the difference in the battle between division leaders in the west as the London Knights downed the Saginaw Spirit 7-3.

Trailing 2-1 entering period two, London exploded offensively with two power play goals, two breakaway goals and a nifty tip by Nathan Dunkley to take the lead and then some.

It was the Knights’ 10th consecutive victory and 15th in their past 16 games.

The Spirit lived up to their name to start things as they zipped around the London zone with a whole lot of spirited play and cashed in twice with goals from Danny Katic on a rebound and by former Knight Dalton Duhart, who converted a sneaky pass by D.J. King from behind the London net.

Those goals gave Saginaw a 2-0 advantage just under 12 minutes in.

Before the end of the first period, the Knights cut into that lead when Billy Moskal bounced a puck ahead to Nathan Dunkley who got behind the Spirit defence and cut to the net. Dunkley was denied by Saginaw goalie Marshall Frappier, but Matvey Guskov followed up on the rebound and slung it underneath a sprawling Frappier to make it 2-1 for the Spirit through 20 minutes.

Connor McMichael tied the game on a power play just 1:44 into the second period with his 38th of the season.

Dunkley tipped a Gerard Keane shot past Marshall Frappier at 7:07 of the middle period to give the Knights their first lead of the game and then Liam Foudy flew down the left wing side of the ice, cut to the net and pocketed his 20th of the year just 33 seconds after Dunkley’s goal and it was 4-2 London. Spirit head coach Chris Lazary switched goalies at that point as Tristan Lennox entered the Saginaw crease.

Not long after that, six-foot-four-inch Knights defenceman Kirill Steklov stole a puck and then showed the scouts in attendance his speed his determination and his hands as he zoomed to the Spirit net and beat Lennox between the legs on a deke and it was 5-2 London.

Lennox lost the blade on his skate and knocked off the net as he kicked out his leg on a Knights 2-on-1,  resulting in a minor penalty to Lennox for delay of game and also causing him to have to leave the game to have his skate repaired. Frappier re-entered the crease and was beaten by a Ryan Merkley slap shot on the ensuing power play to extend the Knights lead to 6-2.

Duhart’s second of the game tightened things to three goals with just under two minutes to go in the second period as he lifted a shot over Brett Brochu.

Things quieted down in the third period, when Guskov scored the only goal on a booming one-timer. The game ended with some rough stuff that included a fight between Guskov and D. J. King of the Spirit and the ejection of Saginaw goalie Tristan Lennox who tried repeatedly to get Brochu to engage in a fight. Lennox was ushered off the ice creating the third goaltending change in the game for the Spirit.

Saginaw outshot the Knights 34-29 as Brochu made 31 stops for his 13th consecutive win in net for London.

The Knights went 2-for-6 on the power play and killed off all four opportunities that the Spirit had on the man advantage.

London managed to hang on to first place in the Western Conference. They lead the Kitchener Rangers by a single point and will face Kitchener on Valentine’s Day at Budweiser Gardens. London’s next game will be at home to Guelph on Feb. 11 on Don Brankley London Knights Hall of Fame night. 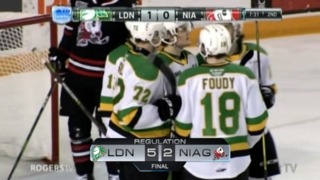